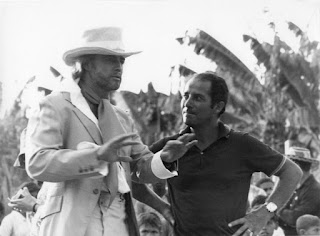 "Pontecorvo admits that he and Marlon were badly matched. As a maniacal perfectionist, the director says he was difficult to put up with. This put off the hypersensitive Brando. Their hatred for each other reached what Pontecorvo calls a 'terrible crescendo.' Due to Marlon's sensitivity and moody nature, what started off as mere discomfort gradually developed into loathing. 'Marlon saw me as his antagonist in whom he accumulated the attribution of all the negative aspects and criticisms he felt about the situation,' Pontecorvo said. 'Anything that disagreed with him in the film was all my fault.'
"Their conflict reached a tremendous climax when Pontecorvo required Marlon to do forty-one takes of a scene near burning fields. Driven beyond exasperation, Marlon 'exploded in raging cries. It looked as if the film would be stopped for good.' At this stage, it was clear that the two men had a totally opposite view of a film's purpose. For Pontecorvo, it was the mirror of a single person. The actors must simply serve an artistic vision. Marlon, of course, simply could not tolerate such an approach, which negated his own creative contribution.
"And as if this ideological conflict were not enough, there was the sheer physical torture of making the film. Marlon was fat again and out of condition, and despite his familiarity with heat and humidity he found the suffocating conditions of Colombia unendurable. The cameraman Marcello Gatti said, 'Although Brando had an air-conditioned villa to live in in Cartagena and an air-conditioned trailer on location, he suffered badly. The humidity was at least ninety to ninety-five percent. We had to travel a hundred kilometers a day, to and from the shooting location in the mountains, on terrible dirt roads. We were given a pack of grains of salt to put into water, which we drank in quantities of ten litres per day.' Gatti added that a truckful of water was driven out to the set; there was disinfectant in everything, in the ice for whiskey as well as in the bathtubs.
"'Marlon's fair, delicate complextion broke out into a terrible rash,' Gatti said. 'The makeup man had to intervene all the time to cover it up. You could tell the poor guy was sick, and as time went by more and more he needed to get away.' Marlon took long breaks and flew to Los Angeles. The film was delayed month after month. Finally Gatti said, the situation became so desperate that when Marlon went to the airport, 'The entire crew, all of us, assistant directors, makeup people, costume designer, electricians, fifty in all rushed to the airport to stop him. He agreed to come back, and we all went to the Hilton, where he offered us champagne and we danced together.'"
Posted by William Connolly at 10:19 PM