An Official Look At the European Zorros 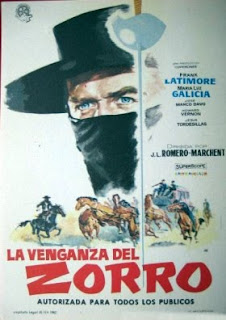 From: ZORRO UNMASKED
The Official History
by Sandra Curtis
During the 1960s, over thirty foreign Zorro movies were produced, chiefly in Mexico, Italy, and Spain. Inexpensively shot, they would be classified in the genre of "spaghetti westerns."
McCulley's masked fox confronted Cardinal Richelieu with the Musketeers in ZORRO E I TRE MOSCHIETTIERI (ZORRO AND THE THREE MOUSKETEERS, 1961, Italy). Zorro returned the grand duchy of Lusitania to its rightful heir in ZORRO ALLA CORTE DI SPAGNIA (ZORRO IN THE COURT OF SPAIN, 1962, Italy). He became King of Nogara in ZORRO CONTRO MACISTE (ZORRO AGAINST MACISTE, 1963, Italy). In ZORRO ALLA CORTE D'INGHILTERRA (ZORRO IN THE COURT OF ENGLAND, 1969, Italy) Zorro opposed a tyrant who ruled an English colony in Central America for Queen Victoria. ZORRO, MARCHESE DI NAVARRO (ZORRO, MARQUIS OF NAVARRO, 1969, Italy) found the masked hero opposing Napoleon's troops in Spain at the beginning of the 1800s. An extra named Sophia Ciccaloni who appeared in IL SOGNO DI ZORRO (ZORRO'S DREAM, 1962, Italy) went on to a renowned film career as Sophia Loren. Another 1962 Italian film, IL SEGNO DI ZORRO (THE SIGN OF ZORRO) launched the acting career of Sean Flynn, the son of romantic swashbuckler Errol Flynn. The fox didn't wear his characteristic black outfit and carve a Z on a wall only once. Directed by journeyman Mario Caiano, the remake was lackluster and forgettable.
The most notable of these foreign productions starred French actor Alain Delon. As with other productions, Delon's 1974 film takes great liberty in place and story, yet preserves the basic elements of McCulley's character.
[The wife of John Gertz, one of the owners of the Zorro copyright, Sandra Curtis obviously needed a better proof reader as Zorro did not fight the Mousketeers in an Italian film.]
Posted by William Connolly at 6:27 AM