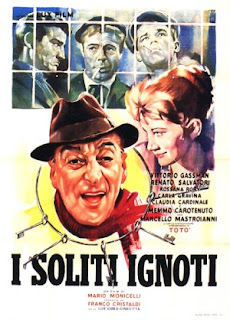 by Ernesto G. Laura
The turn in Vittorio Gassman's career has a name, the director Mario Monicelli, and a title, the film I SOLITI IGNOTI (UNKNOWN, AS USUAL) made in 1958. Monicelli had to fight with producers to give Gassman the leading role. How was it possible to present the protagnoist of HAMLET as a comic figure, he who had been the first young Hamlet against a whole tradition of mature Princes of Denmark (because it took an actor of long experience)? How was it possible for Gassman's aristocratic features to lend themselves to a character that is plebeian, uncouth and inane? But the director had seen the actor on stage, knew that along with tragedies he had not scorned the lighter repertoire, and he got him. I SOLITTI IGNOTI (UNKNOWN, AS USUAL - U.S. title: BIG DEAL ON MADONNA STREET) was the story of a bungled "job" by a gang of two-bit thieves, convinced they are capable of pulling off a large-scale robbery with cracking a safe. Vittorio Gassman, with his face redone (big nose, low forehead, flap ears), was Peppe, a punch-drunk ex-boxer who forms a gang of Mario, a "Mommist" orphan (Renato Salvatori), Tiberio, a photographer with a large family (Marcello Mastroianni), Ferribotte (Roman dialect corruption of "Ferry-Boat"), a jealous Sicilian (Tiberio Murgia), and Capannelle, a funny little old man (Carlo Pisacane). Since none of them knows how to crack a safe, they go take lessons, on a tterrace full of laundry hanging out to dry, from an "expert", hilariously played by Toto. Age and Scarpelli, authors also of the story, wrote with Suso Cecchi D'Amico and Monicelli a script full of gags with witty dialogue that enabled the director to come up with a film that was really new. (In 1959, Nanni Loy would make a sequel, AUDACE COLPO DEI SOLITTI IGNOTI (BIG JOB BY THE UNKNOWN, AS USUAL): the action was shifted from Rome to Milan, but the characters and actors were the same, except for Mastroianni, replaced in a certain sense by Nino Manfredi).
Posted by William Connolly at 11:46 AM