9. Ugo Tognazzi: From the Farce To the Comedy of Manners part three 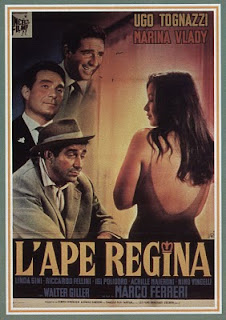 by Ernesto G. Laura
The director who contributed the most to turning Tognazzi into an important actor, also internationally, was not Salce however, but Marco Ferreri. UNA STORIA MODERNA: L'APE REGINA (A MODERN STORY: THE QUEEN BEE), which won the award for the best actress, Marina Vlady, at the 1963 Cannes Festival, was based on an idea by Goffredo Parise and turned into a film script by Rafael Azcona and Ferreri with the collaboration of Diego Fabbri and the Massimo Franciosa-Pasquale Festa Campanile team. The misogyny of Ferreri (and of Parise) takes the form of a symbolic fable about the failure of a marriage which everyone thinks is going perfectly. Tognazzi is a wealthy, forty-year old bachelor who decides to get married and with the help of a priest finds a girl, Regina, who seems ideal: beautiful, wholesome, young, from a good family, serious, religious. After becoming his wife, Regina wants to have a child, but Alfonso doesn't succeed in giving her one. Convinced that a marriage without offspring is worthless, she nails him down to his obligations and forces him to "perform" more and more frequently and intensely. He yields, wearing himself out physically and psychologically, and she, true queen bee, drains the male of all vitality until she succeeds in getting pregnant; but at that point the husband dies. A ferocious satire of manners, in keeping with the iconoclastic and sacrilegious inclinations of Azcona and Ferreri, it reveals in Tognazzi an actor of great restraint and gentle soul opposite a Marina Vlady rightly harsh and aggressive, firm in her determination.
In 1964, Marco Ferreri directed him in LA DONNA SCIMMIA (THE MONKEY WOMAN), teamed up with another French actress, Annie Girardot. In a certain sense, it's the reverse of Fellini's LA STRADA (THE ROAD): the romance between a normal man and a hairy-faced woman who looks like a monkey. The man takes her out of the institution where she is an inmate, exhibits her as a "living phenomenon" in fairs and carnivals and marries her. The ambiguity of the situation lies in the fact that the man loves her and at the same time exploits her, and when she dies in childbirth he has the bodies of she and the child stuffed and goes on exhibiting them in his booth. Ferreri finds in Tognazzi and Girardot two ideal actors because they don't "overload" the situation, but deal with it as if it were perfectly normal, lending even greater relief to the director's paradoxical humor.
Posted by William Connolly at 1:19 PM