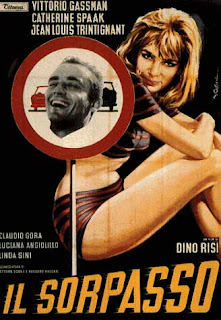 by Ernesto G. Laura
The Gassman-Tognazzi team worked much better than the Gassman-Sordi team: both were actors, for example, with a fondness for disguises, impersonations, for "re-inventing" themselves from top to toe, and the arrogance, presumptiousness and impetuosity of Gassman's character type contrasted nicely with the falsely submissive slyboots played by Tognazzi. In I MOSTRI (THE MONSTERS: 1963) Risi brought them face to face in a memorable contest of acting skill which reached moments of sublime hilarity in the episode, La nobile arte (The Noble Art), where they play two punch-drunk boxers, one reduced to poverty, the other a small-time waiter, both yearning for the victory that would bring them fame and riches. Many years later, in 1977, a sequel was made, I NUOVI MOSTRI (THE NEW MONSTERS), directed by Risi, together with Monicelli and Scola.
In 1971, Risi brought the two actors together again in non-farcical, much more restrained character parts in the film IN NOME DEL POPOLO ITALIANO (IN THE NAME OF THE ITALIAN PEOPLE), written by Age and Scarpelli, where Tognazzi is a magistrate of the utmost integrity who prosecutes a dishonest and arrogant industrialist (Gassman) for a crime he strongly suspects he has committed. But when he had proof that the man is innocent, he destroys it in order to punish in him, above and beyond the innocence of his specific case, the symbol of the corruption and ills of society.
The best film Risi directed with Gassman is IL SORPASSO (THE OVER-TAKE, aka THE EASY LIFE: 1962), a caustic psychological comedy based on the moral duel between the arrogant Bruno (Vittorio Gassman) and the mild-mannered student Robert (Jean-Louis Trintignant), ending, after a wild car race that becomes the symbol of a way of life, with the tragic death of the boy. The comedy is not afraid of ignoring the "happy end" and of leaving the spectator with the disconcertion of an abruptly tragic conclusion. Bruno, at the sight of the young man's body thrown out of his car, has for the first time a look of amazement and dismay on his face and perhaps begins to realize he has lived up till then in the most absolute moral void.
Posted by William Connolly at 9:39 AM