9. Ugo Tognazzi: From the Farce To the Comedy of Manners part four 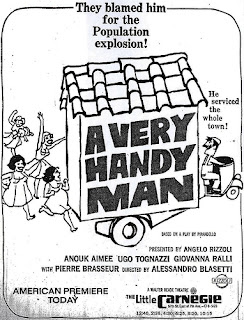 by Ernesto G. Laura
Sometimes, but rarely, the Italian-style comedy turned to the theater as a source of inspiration (it is even so the exception andnot the rule as is instead the case with the frequent passing of stage hits from Broadway to Hollywood). Such was the case with LIOLA which Alessandro Blasetti directed in 1964 on the Luigi Pirandello play in which Tognazzi skillfully portrays the leading character, an incorrigible woman-chaser in a Sicilian village, surrounded by a swarm of children. It was also the case with IL MAGNIFICO CORNUTO (THE MAGNIFICENT CUCKOLD: 1964) by Antonio Pietrangeli, based on the charming play by Fernand Commelynck, where the Parisian "vaudeville" is taken as a model for an ironical speculation on the meaning of jealousy, revealing, under the equivocations, an almost Pirandellian search for the "truth" and non-superficial human meanings. A certain Pirandellian flavor, though based on an original story (by Enzo Gicca Palli), also marks UNA QUESTIONE D'ONORE (A QUESTION OF HONOR) with which Luigi Zampa in 1966 aimed his satirical darts at the codes of honor typical of certain ancient and rigid mores in Sardinia. The conflict between the forms to be respected and the truth which cannot be revealed is the main problem of the protagonist, Efisio Mulas (Tognazzi), convinced by relatives and friends to kill his wife for supposed adultery which he cannot deny without implicating himself in a murder, so he is forced to kill his innocent spouse.
A return to the subject of the middle-aged man who loses his head over a young girl is successfully handled in LA BAMBOLONA (THE BIG DOLLL: 1968) by Franco Giraldi, on the novel of the same title by Alba de Cespedes. Giraldi also directed Tognazzi in CUORI SOLITARI (LONELY HEARTS: 1970) which is a scathing satire of "couple swapping" in the framework of an indolent and bored provincial society looking for amusement.
Posted by William Connolly at 10:15 AM