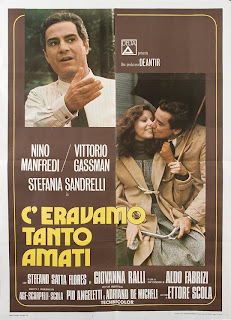 by Ernesto G. Laura
The third director important to Gassman's career as a film actor was Ettore Scola, formerly a script-writer, as has been seen, for films by Risi and others. After several routine but respectable films - SE PERMETTETE PARLIAMO DI DONNE (IF YOU DON'T MIND, LET'S TALK ABOUT WOMEN) and LA CONGIUNTURA (THE JUNCTURE) in 1964, L' ARCIDIAVOLO (THE ARCHDEVIL) in 1966 - he went off in a different direction, of expressive investigation and acute psychological analysis, with C'ERAVAMO TANTO AMATI (WE'D BEEN SUCH FRIENDS, aka WE ALL LOVED EACH OTHER SO MUCH: 1974), written by Age and Scarpelli. Dedicated to the memory of Vittorio De Sica, who had recently died and appears in one sequence, the film weighs the existential pros and cons of a disappointed generation. Three fifty-year olds meet thirty years after their participation in the Resistance and their hopes in the struggle for freedom and compare their disappointments as well as their moral debilitation. Gassman is a brilliant and cynical lawyer, Stefano Satta Flores (an actor who comes decidedly to the fore only with this film) is an aspiring film-maker resigned to the routine of a newspaper job, Nino Manfredi, the only one who is "undefeated" and not pessimistic, is a simple litter-bearer in a hospital whose ideals are still intact. Around the vicissitudes, past and present, of the three protagonists unfold thirty years of history in Italy, also in its customs and conventions (and the film, which starts in black and white, changes to color within a given frame to indicate also visually the passing of an epoch, the advent of color films). The director and script-writers, with some of the same actors, Gassman, Stefania Sandrelli, are not as convincing in what is meant as a sort of sequel of this film, LA TERRAZZA (THE TERRACE: 1979), much more closely related to the episode film formula. In any case, Gassman draws a penetrating portrait of a member of parliament beyond middle age who falls in love with a married woman, risking a "scandal" that could jeopardize his career.
Vittorio Gassman, like his colleagues mentioned in the previous chapter, also took his try at directing, making among others an excellent and poetic comedy, SENZA FAMIGLIA, NULLATENENTI, CERCANO AFFETTO (UNPROPERTIED PERSONS WITHOUT FAMILY SEEKING AFFECTION: 1971), written with Age and Scarpelli, where a slightly crazy forty-year old (Paolo Villaggio) looks for his father to overcome his loneliness as an orphan and is convinced he has found him when he runs tino a carnival quack who works as a magician in small circuses. Both essentially naive, they reach Rome and clash violently, with the harsh reality of the city, running into unpleasant people who scorn and cheat them.
Posted by William Connolly at 1:17 PM