9. Ugo Tognazzi: From the Farce To the Comedy of Manners part five 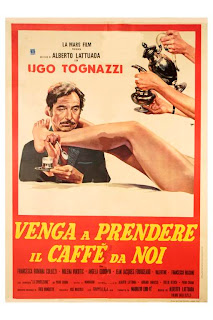 by Ernesto G. Laura
While, as has been observed,the interchange between film comedy and stage comedy was rare in Italy, that between films and literature was instead quite intense. One of the directors most skilled in translating the written word into visual imagery, Alberto Lattuada, was the first to bring to the screen the particular world of the writer Pietro Chiara, adapting his novel, LA SPARTIZIONE, in the film VENGA A PRENDERE IL CAFFE...DA NOI (COME HAVE A CUP OF COFFEE...AT OUR HOUSE: 1970), on a script written by Chiara, Tullio Kezich and Adriano Baracco. Chiara is a Lombardy writer, stinging in his attacks on certain backstairs carryings-on among the apparently irreprehensible bougeoisie of his district. Emerenziano is a middle-aged Internal Revenue officer who moves to a small town on the Lake of Como and there marries an old maid recently come into money, settling down in the house where she and her two sisters live, with all of whom (including the maid) he establishes a discreet and perfect sexual menage, to the delight and satisfaction of one and all.
The case of well-known writers who take up film directing is also not uncommon. Alberto Bevilacqua came out in 1970 with LA CALIFFA (THE CALIPHESS), based on his novel, where Tognazzi, in a story with a tragic ending, vigorously and intensely portrays the figure of an industrialist who has an affair with a working girl who until then has heartily opposed him as her "boss". In the affair, both of them are forced to pay a price: he, persuaded, by frequenting the girl, to have a clearer understanding of the arguments of his dependents, is unpopular and accused of being "progressive" by his business colleagues, and she is viewed suspiciously by her fellow workers who fear she has gone over to the boss' side. Subtler and more disturbing, the second psychological comedy, it too with specific social references, filmed by Alberto Bevilacqua: QUESTA SPECIE D'AMORE (THIS SORT OF LOVE: 1972). Tognazzi plays the double role of Federico, a forty-year old man of lowly origins who lives in Rome at his rich wife's expense, and of Federico's father, who has stayed behind in Parma and lives among the simple people. Whent he marriage starts to break up, destroyed by emptiness and boredom, Federico goes back to Parma to visit his father and rediscover the real roots of his own world and hence of his own life. His wife, who joins him, also discovers she has changed and their marriage seems to find new strength because their love has not completely died. But once back in Rome, they pick up the old routine and their separation is inevitable.
Posted by William Connolly at 12:55 PM