2. The Forties: The Season Of Neo-Realism part four 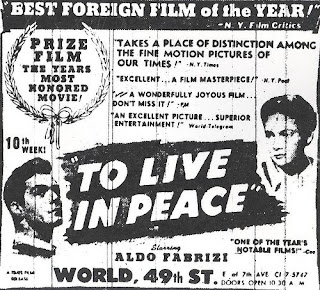 But was it possible to introduce authentic comedy into the neo-realistic genre without betraying the spirit of it? That's what Luigi Zampa (born in 1905) succeeded in doing in 1946 with VIVERE IN PACE [LIVE IN PEACE].
Aldo Fabrizi was Uncle Tigna, a peaceful farmer who during the German occupation hid on his farm two Americans who had escaped from a concentration camp; Ronald, a war correspondent, and Joe, a black soldier. The script, written by Suso Cecchi D'Amico, Fabrizi, Piero Tellini and Zampa, follows the usual pattern of the sentimental comedy: there's a love affair between Ronald and Tigna's niece and a whole series of humorous strategems to keep the Germans and Fascists away from the cellar where the two refugees are hiding. But one evening Joe - unversed in Italian wine - gets drunk just when Hans, a German sergeant, appears. Fortunately, Hans gets drunk too and the two men fraternize without realizing the situation. The next day Hans deserts. The Nazis execute him and also kill Uncle Tigna for having sheltered two "enemies". The tragic ending does not prevent the entire film from being played for smiles, in a perfect balance between the basic tone of comedy and the dramatic events, and above all with complete respect for the historical reality and the humanity of the characters. VIVERE IN PACE [LIFE IN PEACE], starring, aside from Fabrizi, the American actors Gary Moore and John Kitzmiller, already seen in PAISA, was an enormous success all over the world and one of the films that opened the doors to international acclaim for Italian cinema. In 1947 the New York film critics named it the best foreign film of the year.
Posted by William Connolly at 9:15 AM