2. The Forties: The Season Of Neo-Realism part five 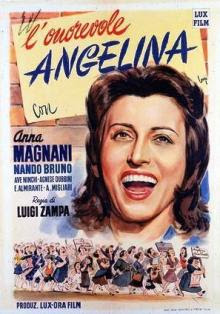 Meanwhile, certain basic features of neo-realism - shooting out in the open of the streets, working-class milieu, use of dialect - had by now entered the mainstream of Italian film-making. Anna Magnani, for example, returned to her role as an impetuous, aggressive and warm-hearted woman of the people beset by all the problems of post-war Rome in two rather mediocre but engaging films directed by Gennaro Righelli (1886-1949): ABBASSO LA MISERIA! [DOWN WITH POVERTY!: 1945] and ABBASSO LA RICCHEZZA! [DOWN WITH RICHES!: 1946]. Magnani risked, however, letting herself be type-cast had she not met the director of VIVERE IN PACE [LIVE IN PEACH]. For her, Luigi Zampa wrote (with Suso Cecchi D'Amico and Piero Tellini) and directed in 1947 L'ONOREVOLE ANGELINA [THE HONORABLE ANGELINA], the colorful and lively portrait of a woman from the suburban slum areas (these areas, known as borgate, grew up on the outskirts of Rome during Fascism and soon became the symbol of poverty and social ostracism). The wife of a police sergeant, Angelina, driven by the hunger of those difficult times, leads a riotous crowd of women to occupy a foodstore which turns out to be the heart of the black market. The success of the operation makes her the natural leader of the other mothers of the "borgata" in the vindication of a whole series of social claims, and in the end her name is even put up for Parliament. It may be pointed out that the film was made several decades before the feminist movement exploded in Italy.
Meanwhile, the nation's screens were invaded by the products of Hollywood, which returned after the long interruption of the war years. Hollywood presented not only new films but also those made over the last six or seven years. Standing out among the other genres was the musical, with the subdivisions into song-and-dance films (seperate numbers linked together by a vague story line) and musical comedies. At the same time in Italian theaters revues were all the rage, and were becoming more and more lavish and spectacular as well as sexy.
Posted by William Connolly at 3:37 PM