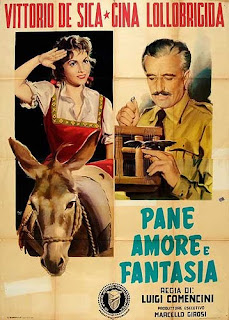 The optimistic spirit and the discovery of the Southern provinces instead of Rome in DUE SOLDI DI SPERANZA (TWO CENTS OF HOPE) were directly responsible for an enormously successful film made in 1953, the first of a series PANE, AMORE E FANTASIA (BREAD, LOVE AND FANTASY) by Luigi Comencini (born in 1916), written by the director himself in collaboration, by no coincidence, with the Margadonna of the preceding film.
Comencini, a Lombard architect who had worked at the Milan Film Library, had written scripts for Lattuada and Soldati, signed several excellent documentaries and served as film critic on various newspapers, and magazines. A director since 1948 of dramatic films, he found in PANE, AMORE E FANTASIA (BREAD, LOVE AND FANTASY) the important opportunity for a turning point in his career.
In the film, two love stories between people of two different generations are interwoven. On the one hand, there is, in fact, a shapely young girl, proud and rebellious in character, precisely in keeping with the model launched by Carmela in DUE SOLDI DI SPERANZA (TWO CENTS OF HOPE): she is nick-named "la Bersagliera" (from the phrase, "alla bersagliera," which means headfirst, daringly, with dash) and was to launch the long, brilliant career of Gina Lollobrigida. In the careful balancing of the roles, the "Bersagliera's" suitor was a shy, awkward young man, a Veneto carabiniere (Roberto Risso). On the other hand, a middle-aged couple go through the bickerings of love. He is a carabiniere warrant officer with gray hair but an incorrigible woman-chaser, she the attractive midwife of the village. The role of Warrant Officer Carotenuto relaunched, as an actor, Vittorio De Sica, who had never completely given up acting but who in recent years had become one of the most distinguished neo-realistic directors. With PANE, AMORE E FANTASIA (BREAD, LOVE AND FANTASY), the so-called "rosy neo-realism" took root, that is a comedy of character where the Italian (and especially Southern Italian) landscape plays a decisive role in defining characters and situations, portraying in a deliberately optimistic light a certain rustic and provincial reality. The series continued in 1954 with PANE, AMORE E GELOSIA (BREAD, LOVE AND JEALOUSY) by the same director and with the same four actors, in 1955 with PANE, AMORE E... (BREAD, LOVE AND...), directed by Dino Risi and in which the "Bersagliera" of Gina Lollobrigida was replaced by the "Pizzaiola" (pizza-girl) impersonated by Sophia Loren and ended in 1959 with PANE, AMORE A ANDALUSIA (BREAD, LOVE AND ANDALUSIA), directed by the Spanish director, Xavier Seto, and made in Spain, in the vain attempt to preserve the original inspiration in such a different setting, both geographical and in the characters involved (this time De Sica's girl-friend was Carmen Sevilla).
Posted by William Connolly at 10:30 AM