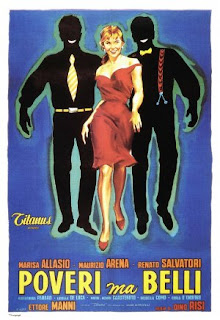 by Ernesto G. Laura - Compiled by A.N.I.C.A. (National Association of Motion Pictures and Affiliated Industries) Rome, Italy - Edited by CIES Soc. Coop. r.1 (Institute for the Promotion of Italian Motion Pictures Abroad) Rome, Italy under the auspices of the Ministry of Tourism and Entertainment
SOTTO IL SOLE DI ROMA (UNDER THE SUN OF ROME), as mentioned above, ushered in the subject of the very young, setting them into a specific framework, the popular suburban quarters of Rome. POVERI MA BELLI (POOR BUT GOOD-LOOKING) is a film dating from 1956 and already contains in its title the characteristics of the genre.
Written by Dino Risi (1916) together with two future directors, Massimo Franciosa (1924) and Pasquale Festa Campanile (1927, also a vivid writer), the film recounts, with vivacity and some irony, the little everyday events and the lovers' quarrels of a group of youngsters in the Rome of the '50s, helping to launch a whole bevy of new actors. There was the bully, or "bullo", liar and braggart, pursued by women (Maurizio Arena) and there was the usual girl with the big bust and the sexy curves (Marisa Allasio: it was she who inspired the term, which soon became common usage to describe this particular kind of woman in films, "maggiorata fisica," or "body over-size", something like the American "sweater girl"). Sharing their lot, another couple (Renato Salvatori, Lorella De Luca). Within the limits of a certain superficiality, the image of a lower-class suburban Rome seen through the eyes of the young, emerged with a certain flavor and color, stimulating in Italian audiences an interest in "homegrown" characters and situations, in no way imitative of the well-known models of Hollywood and Paris. It was inevitable that Risi, again with Franciosa and Festa Campanile and the same actors, should follow POVERI MA BELLI (POOR BUT GOOD-LOOKING) with BELLE MA POVERE (GOOD-LOOKING BUT POOR: 1957) and POVERI MILIONARI (POOR MILLIONAIRES: 1959).
Posted by William Connolly at 3:10 PM