3. Poor, Young and Good-Looking part one 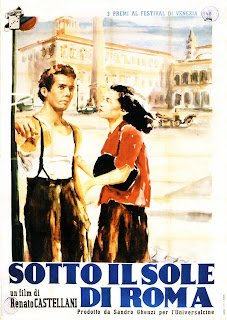 In 1948, SOTTO IL SOLE DI ROMA (UNDER THE SUN OF ROME) inaugurated an important chapter in the new Italian-style film comedy. It was the work of a director who up till then seemed to move in the opposite direction from neo-realism: Renato Castellani (born in 1913). Formerly an assistant and script-writer for Mario Camerino, he made a name for himself during the war as a front-ranking representative of the refined and elegant school of a cinema of literary origins. His film UN COLPO DI PISTOLA (A PISTOL SHOT: 1941), was a delicate transpotion of the beautiful story by Pushkin.
Following the story of three youngsters, Ciro, Geppa and Iris (played by three non-professional actors: Oscar Blando, Francesco Golisano, Liliana Mancini), from the San Giovanni quarter of Rome, through the diary of one of them, Ciro, Castellani moves through the span of time dear to the neo-realists, from 1943, under the German occupation, to 1945, the post-war period. Without question, this film couldn't have come into being without the popular success, starting already with AVANTI, C'E POSTO! (COME ON, THERE'S ROOM!), of films related to the city of Rome and its dialect. But in AVANTI, C'E POSTO! (COME ON, THERE'S ROOM!), CAMPO DE' FIORI, L'ULTIMA CARROZZELLA (THE LAST CARRIAGE) and even in more recent comedies like L'ONOREVOLE ANGELINA (THE HONORABLE ANGELINA), the stories were about grownups, people with jobs, a specific social status. SOTTO IL SOLE DI ROMA (UNDER THE SUN OF ROME), instead, ushers in the subject matter of the very young, that new generation which grew up amidst the physical ruins of the bombardments and the moral ashes of the Fascist myth. Ciro, in the ups and downs of a complicated period, thinks of "making shift," that is of pulling through tough situations without risking too much, and can count on the loyal friendship of Geppa and the love of Liliana. Part "bully", or "bullo", as they say in Rome, that is flashy and overbearing, part hoodlum, with a very elastic, moral code, he ends up on the verge of delinquency by attempting a robbery. In the shoot-out that follows, his father, a night watchman, who gets involved accidentally, is killed. Ciro, faced with the tragedy, finally becomes a man, gets married, finds a regular job as a night watchman like his father. "Then I realized," Ciro says in the closing remark of the film, "who my father was. My father was the one who paid for everybody. Carefree youth was over. Now it's my turn to pay." This bitter conclusion sets the seal on a film that is, instead, full of gaiety. The director gives himself up with joy to the vital force of this instinctive working-class boy, and human sympathy even blurs his judgement. It is that unknown world of poor, uncouth, but cocky and good-looking youngsters, brought up in the ghettos of the suburban slums that would later find their literary and cinematographic muse in Pier Paolo Pasolini.
The film is well constructed, with a script written by, among others, Sergio Amidei, the principal author of ROMA, CITTA APERTA (ROME, OPEN CITY) and PAISA, and Emilio Cecchi, a discriminating man of letters who from 1930 on gave his support to talented young film-makers. While the fondness for exploring the world of the common people, shooting out-of-doors, the use of non-professional actors, are neo-realistic fixtures, Castellani rejected the instinct, the brilliant improvisation of a Rossellini and composed highly elaborate and carefully prepared shots.
In the succeeding E PRIMAVERA (IT'S SPRING) of 1949, written with Suso Cecchi D'Amico and Cesare Zavattini, the director transposed a story of infidelity (with bigamy, couple swapping and all that), typical of the old Parisian vaudeville, from its original bourgeois setting to a popular setting, enlarging moreover the geographic and linguistic framework of the new Italian-style comedy beyond Rome and the Rome dialect: the story in fact moves between Sicily and Milan and the leading character is Tuscan.
Posted by William Connolly at 1:58 PM