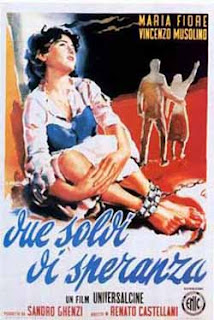 
Even so the future development of the Italian-style comedy would not have taken place without the extraordinary success, also with critics (Grand Prize "ex-aequo", among other things, at the Cannes Festival), of the third important film comedy of Renato Castellani, DUE SOLDI DI SPERANZA (TWO CENTS OF HOPE), written in collaboration with a highly experienced script-writer like Ettore M. Margadonna and starring a celebrated actress of the Neopolitan theater, Titina De Filippo (the sister of Eduardo and Peppino), but directly inspired by what Castellani had been told by the fisherman, Vincenzo Musolino, who played the lead. The film was shot in the Southern Italian village of Boscotrecase, taking, the other actors - except for the female lead, Maria Fiore, but she too non-professional, like the others - from among the villagers themselves and letting the situations emerge through the spontaneous collaboration of one and all.
Once again, Renato Castellani showed a remarkable power of observation in catching the reality and the psychology of a popular world, but on this occasion far from the suburban slums in a Southern rural community in the vicinity of Naples. It is the story of a passionate and happy love affair between two penniless people, full however of determination which helps them overcome every mishap and every difficulty. Jobless, the young man in question works as a driver, then a soft-drink vendor, billposter and sexton. The love and joy of living of the young couple, against the background of a tragic poverty, harks back to the great tradition of the picaresque novel, in an uninterrupted sequence of little episodes, funny gags, perceptive observations of the human condition, in a love story constantly supported by the hope of the title. Maria Fiore as Carmela sketches the profile of a female figure that was long to be the center of attraction of the Italian-style film comedy, the figure of the girl shapely in build, sexy and provocative in manner, but essentially more serious and innocent than she appears.
Posted by William Connolly at 11:47 AM