2. The Forties: The Season Of Neo-Realism part eight 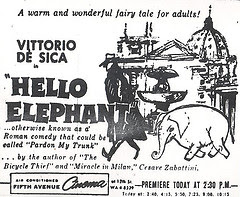 Many simple stories of simple folk, recapturing that fondness for the anti-hero which had been typical of Mario Camerini and Alessandro Blasetti in the '30s and '40s, were set against the background of post-war Rome. Alessandro Blasetti in PRIMA COMUNIONE [FIRST COMMUNION: 1950] tells about the hours preceding the religious ceremony of the title, which should be a peaceful family celebration. But the little communion girl's despotic father loses his temper because the white dress ordered for her is not ready and from incident to incident the tension mounts, completely destroying the idyllic atmosphere of the beginning. Written by Cesare Zavattini, the comedy is a ferocious attack on conventions and Aldo Fabrizi plays the lead with rage and authority. Zavattini provided Camerini with the story of MOLTI SOGNI PER LE STRADE [MANY DREAMS ON THE ROAD: 1948], in which a poor devil, assailed by debts, steals a car. But his wife thinks he has rented the car to take her for a ride and goes off with him. The improvised thief is unable to get the car to the "fence" and the deal goes up in smoke, so there's nothing to be done but to take the car back to the garage where it had been stolen. A charming little tale, typical of the pre-war Zavattini more than of the author of LADRI DI BICICLETTE [BICYCLE THIEVES]. It was Zavattini again who gave Gianni Franciolini (1910-1960) the idea for a particular film BUONGIORNO, ELEFANTE! [GOOD MORNING, ELEPHANT!: 1952], in which an Indian prince (played by Sabu), in order to return a favor done him by, a simple grade-school teacher (Vittorio De Sica), sends him a present from India: nothing less than an elephant. With all the imaginable troubles the poor teacher runs into trying to dispose of the cumbersome beast. The film remains one of the finest examples of a light sentimental comedy that succeeds in appealing to audiences without sacrificing a realistic portrayal of characters and setting.
Posted by William Connolly at 9:58 AM