Hammer House of Mystery and Suspense 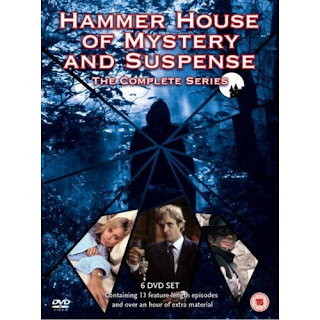 This mid-1980s 13-episode anthology TV series was retitled Fox Mystery Theater when it ran on the USA Network in the U.S. It was the last production of the old Hammer company and used some veteran talent, but like the Hammer House of Horror TV series, it was dreadful. Still, I want a copy of each episode as I collect on Hammer and my old beta tape off-air recordings are pretty poor. I didn't know that this came out on DVD in the U.K. a couple of years ago, but is now out-of-print and going for over $100 on Amazon.com. However, a few years ago, one episode, Czech Mate, aired on the Fox Movies cable channel. Last night, a second episode, Mark of the Devil, also popped up. Well, with patience perhaps the other eleven will come my way without my having to spend any real money.
Posted by William Connolly at 2:22 PM