The screenwriter on THE MERCENARY 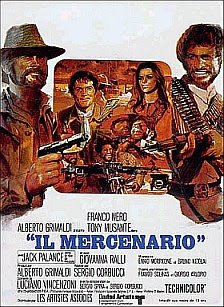 Franco Solinas: It was the epoch of the great Westerns, and Grimaldi had done the Leone films and LA RESA DEI CONTI (THE BIG GUNDOWN) which earned a great deal. I didn't know Grimaldi, but one day he sent Gigi de Santis to me. He'd been in the press office at Rizzoli for many years and was supposed to go with Grimaldi, but then it didn't happen. He passed on Grimaldi's interest in doing a film with Gillo and me. In the meantime, Gillo was casting around, looking for something to do, starting from the presumption that the BATTLE OF ALGIERS had been an unrepeatable fluke, and that his next film would be something simply dreadful! (Gillo has this pessimistic point of view about himself and other people...) He kept coming to me with these horrendous projects, all Westerns, and I asked him if he'd lost his mind. Having put Pontecorvo in contact with Grimaldi, I became acquainted with Grimaldi, I called my lifelong friend Arlorio, and finally said to Gillo, "Hey, do you want to do a Western? This way, if I fail, it will just be a modest failure."
I sought out an idea, and this idea was IL MERCENARIO (THE MERCENARY). I haven't seen the film, I don't even know who wrote the screenplay. I didn't even write the treatment; I had to run off to Cuba, and I didn't want to get too perfectionistic or waste too much time on the scenario. Gillo liked it well enough, but it was always a film with limitations, beginning with the fact that it was a sort of Western. Then I got a crisis of conscience, it seemed absurd to embark on this project having been a cinematic high priest of rigor, having made BATTLE OF ALGIERS etc etc., and I suddenly said to Grimaldi: "This is the story, but its botched in my opinion, you need to find someone better." Grimaldi liked it, Corbucci heard him talk about it, he - in turn - came to me to have me tell it to him better, and it ended up that Grimaldi produced this film with Corbucci, and we went to work on another idea for Grimaldi, which then became the idea for QUEIMADA (BURN).
Posted by William Connolly at 10:33 PM