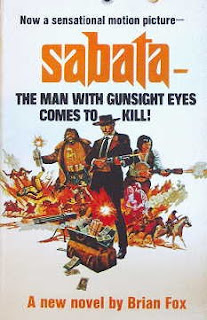 Gianfranco Parolini: IF YOU MEET SARTANA PRAY FOR YOUR DEATH, SABATA, and RETURN OF SABATA were the antithesis of Sergio Leone's films. I can say this now because he's dead, poor soul, and I'm still here. Because he once said that my films were only saved by their gags and likeableness. He didn't think I was capable of directing actors. When Leone broke with Grimaldi's P.E.A. company, Grimaldi called me right away. Piero Lazzaro, my general organizer, was in the desert in Nevada or in Nebraska...and there was this big shed. He was with Sergio Leone, they were preparing a film. On the shed someone had written "lf you meet Sartana pray for your death". Piero told me that Sergio Leone said "That son of a bitch has even turned up here !" Get it ? "He's even exported his gags here !" That film was a big hit too. They made sequel after sequel and they were all hits for Alberto Grimaldi.
Posted by William Connolly at 5:41 PM