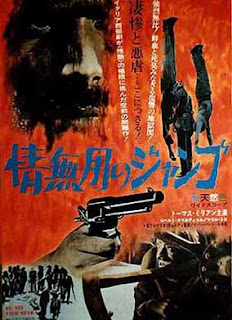 When I was 13, I declared that I had a dream to become a successful film director and to make a movie in Italy. And for that movie in Italy, I would desire in payment only a print of my favorite movie SE SEI VIVO SPARA - which I had seen 8 times when it played the Japanese film circuit on Okinawa. By having my own print, I could see it anytime I wanted - and maybe hire someone to translate the dialogue into English as I had been watching it in Italian with Japanese subtitles.
I never became a successful film director, nor did I make a movie in Italy, but, thanks to Blue Underground, I have a terrific DVD copy of IF YOU LIVE SHOOT - with the title DJANGO KILL - and it has English subtitles. So, part of my dream came true.
Posted by William Connolly at 10:37 PM