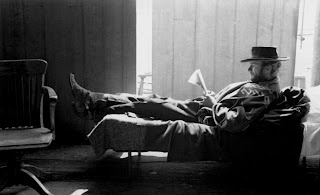 Sergio Leone: Clint Eastwood was a champion swimmer, and then he spent nine years as second lead on one of those American television series that survive through sheer force of inertia. Of our first meeting, I recall his indolence, the posture and attitudes of a cat-like man. And there was his lazy gait, he moved almost like a sleepwalker. I'd chosen him after the studio turned down James Coburn claiming he was too expensive (at one point, I'd also thought of Henry Fonda, however). Back then, Coburn was asking 25,000 dollars a picture. Clint was prepared to accept 15,000. Naturally, I changed the character to suit him. I had no particular problems directing him. The major difficulty was convincing him that his character ought to clench a cigar between his lips. Eastwood didn't smoke: the smell turned his stomach. I wore myself out teaching him the various tricks of a seasoned cigar aficionado. I also recall that whenever he wasn't needed on the set, he was inclined to nap, and that, although almost two meters tall, he'd found a system of curling himself up into a "topolino" (tiny car), and sleeping as if in the most comfortable of beds. But when the moment came to act, he suddenly acquired dynamism, an incredible speed, in strict contrast with the rest of his personality.
Posted by William Connolly at 8:24 AM