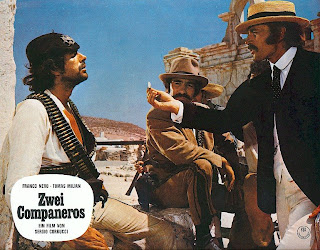 Tomas Milian: I acted with Franco Nero in VAMOS A MATAR, COMPANEROS. A very nice man. Also, very ambitious, and very professional. He was very proud of his good looks, of his acting technique, and of his American appearance. When we acted together in Westerns there was some bad blood, but only because I drew on my clownish talents, and he suffered from the fact that comedy wasn't part of his actor's bag of tricks. The character I was playing teased him a lot, but I – personally - always did this affectionately because he was a sweetheart. But he got pissed off; he confused cinematic fiction with life, and was convinced that I was mocking him off the set, as well.
Posted by William Connolly at 1:07 AM