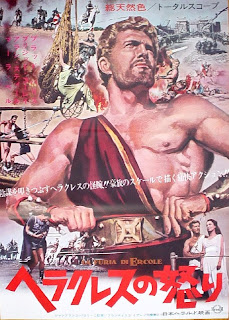 Gianfranco Parolini: I had a peplum foisted on me, by my employer, a man called Giuseppe Maggi. I wasn't that convinced about it. The producer, who was risking his money, before starting, before the script was written, said to me (It was the time of 'Herculations'): "Let's have plenty of them !" I tried to limit that stuff as much as possible, it was ridiculous. Even in GOLIATH AGAINST THE GIANTS, when he moves the mountain... It's ridiculous, but it works. The public, especially the kids, love to see 'Herculations'. GOLIATH AGAINST THE GIANTS was handed to me when poor old Malatesta, the director, lost the plot. How can I talk about the dead like that? The editor, who was called Mario Sansoni, made up a rhyme that went: "Edit Malatesta and your brain will start to fester. Edit Parolini and the time and effort's teeny."
He could just cut off the slate and edit because I'm basically an editor, I come from the cutting room. I worked my way up in editing and that's very important. You don't waste time and money and it gives you an idea of the rhythm of the film.
I do a lot of set ups. I've done up to 50 set ups a day ! That's what saves me, because otherwise... to finish you have to do a pan shot with people spouting dialogue... What a drag ! You can't create a rhythm, that's the point.
Why was poor old Malatesta fired (from GOLIATH AGAINST THE GIANTS) ? I respected and liked him. He'd asked the producer to build a ship for the scene in which the dragon eats the little boy. Then I stepped in, but I didn't take credit for it. I didn't want to, I wasn't the director of the film. I shot everything with just a mast, a quarterdeck and stern, three pieces ! I joined them up by cutting. I shot the storm in the pool at Cinecitta, with the ship capsizing and everything. I shot it for almost nothing. He would've needed 50 million just to build the ship.
Posted by William Connolly at 8:47 AM