Mario Bava on THE GIANT OF MARATHON 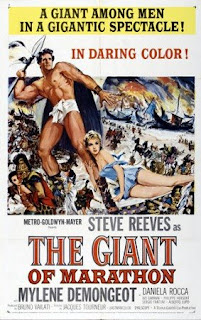 Mario Bava: The battle of Marathon was filmed in Yugoslavia, but I didn't want to go, I preferred to stay with my friends in Ponza.
Then the material of the battle started to arrive, and I had to view it and cut it. There were moments when I could have fainted with laughter. It was such a comic film. Four thousand extras of the Yugoslavian army with their sandals worn over their army boots. The charioteers who drove the wagons of the king in vests and with cigarettes in their mouths; followed by crowds of little dog bastards that always strolled about on the sets of the films in Yugoslavia. All useless stuff. The producer wanted to commit suicide. They put the film in my hand. We had only ten days. So, first to Rome. I shot 287 scenes in a single week with only the grips. Then to Grottarossa with a hundred extras who almost died from the cold of the north wind, and who were made to appear like twenty thousand. The hand-to-hand fighting, which had seemed like caresses because the Yugoslavian extras were afraid of hurting themselves, I fixed by shooting at 5 fps instead of the normal 24. From these desperate measures came the real battle.
Posted by William Connolly at 8:23 AM