Corbucci wanted to be taken seriously. 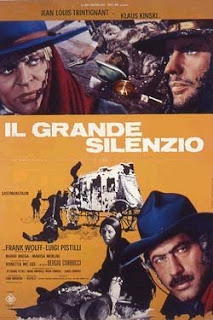 Sergio Corbucci: In my westerns there was always a bit of political reference, there were always revolutionary subtexts, a theme never really fathomed or truly appreciated by the Italian critics, in contrast to those elsewhere. Especially in Germany, where they've discovered me to be the head of a school of moviemaking, and famous intellectuals have dedicated incredible words to me. Moreover, my heroes were always slightly physically handicapped. In IL GRANDE SILENZIO (THE GREAT SILENCE), he was mute because his vocal cords had been cut. In MINNESOTA CLAY he was blind. I always wanted them impaired because the idea of a disabled hero intrigued me, made certain solutions more difficult, required more thinking and study, allowed for some coups de theatre and striking initial premises that made the hero more interesting than the usual stereotype. THE GREAT SILENCE was a film that caused an outcry because it was the first time in a Western that the hero died in the final duel with the villain: Jean Louis Trintignant was killed by Klaus Kinski, who then rode off into the distance. In Paris, somebody shot at the screen, they all carried on like madmen.
Posted by William Connolly at 10:18 PM