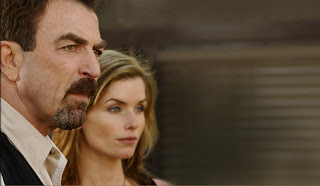 I'm not a fan of Tom Selleck, but I liked him in his "I didn't get to make RAIDERS OF THE LOST ARK" adventure film HIGH ROAD TO CHINA, the Michael Crichton sci-fi thriller RUNAWAY and his bit in IN & OUT. I tuned in for the first Jesse Stone TV movie STONE COLD because it featured Polly Shannon, and after seeing her in the Canadian TV Movie THE GIRL NEXT DOOR I'll watch her in anything. That her character was killed midway through the movie was balanced out by the fact that Jane Adams - who I really liked in the short-lived TV series Citizen Baines - was half of the psycho couple that did the deed. Anyway, in the character of Jesse Stone, Selleck proved to be terrific, nicely infusing the role with melancholia. Later, I also enjoyed Selleck in IKE: COUNTDOWN TO D-DAY. Anyway, I've recorded the other Jesse Stone TV movies, but have only watched the new one that aired last night JESSE STONE: THIN ICE. As with STONE COLD, the atmosphere and characters were more compelling than the plotting, but the film was satisfying - partly thanks to nice support from Leslie Hope - who I first became aware of during the first season of 24 but became a fan of from the short-lived TV series Line of Fire, Kathy Baker and William Devane. And they're reportedly in production on JESSE STONE: NO REMORSE returning Selleck, Baker, Devane, Stephen McHattie and William Sadler. That sounds promising - all the more because also returning is Joe the Dog.
Posted by William Connolly at 12:07 PM