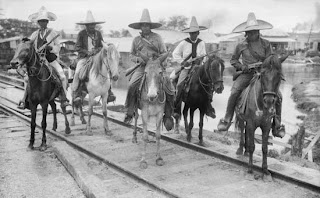 From Wikipedia, the free encyclopedia
"La Adelita" is one of the most famous corridos (folk songs) to come out of the Mexican Revolution. It is the story of a young woman in love with a sergeant who travels with him and his regiment.
The song is supposed to be based on a real-life character, the identity of whom, however, has not been yet established beyond doubt. Some claim her real name was Altagracia Martinez, also known as Marieta Martinez, while others maintain she was, in fact, Adela Velarde, who actually took part in military action in the capacity of nurse, not out of infatuation with a sergeant, as a popular myth goes.
"La Adelita" came to be an archetype of a woman warrior in Mexico during the Mexican Revolution. An Adelita was a soldadera, or woman soldier, who not only cooked and cared for the wounded but also actually fought in battles against Mexican government forces. In time the word adelita was used for all the soldaderas, who became a vital force in the revolutionary war efforts.
The term La Adelita has since come to signify a woman of strength and courage.

Lyrics
En lo alto de la abrupta serranía
acampado se encontraba un regimiento
y una musa que valiente los seguía
locamente enamorada del sargento.
In the heights of a steep mountainous range
a regiment was encamped
and a bright woman bravely follows them
madly in love with the sergeant.
Popular entre la tropa era Adelita
la mujer que el sargento idolatraba
y además de ser valiente era bonita
que hasta el mismo Coronel la respetaba.
Popular among the troop was Adelita
the woman that the sergeant idolized
and besides being brave she was pretty
that even the Colonel respected her.
Y se oía, que decía, aquel que tanto la quería:
Y si Adelita quisiera ser mi novia
y si Adelita fuera mi mujer
le compraría un vestido de seda
para llevarla a bailar al cuartel.
And it was heard, that he, who loved her so much, said:
If Adelita would like to be my girlfriend
If Adelita would be my wife
I'd buy her a silk dress
to take her to the barrack's dance.
Y si Adelita se fuera con otro
la seguiría por tierra y por mar
si por mar en un buque de guerra
si por tierra en un tren militar.
If Adelita would leave with another man
I'd follow her by land and sea
by sea in a war ship
by land in a military train.
Posted by William Connolly at 12:04 AM