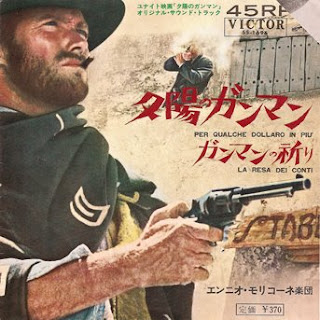 Sergio Leone: When I went to America after FISTFUL OFDOLLARS and FOR A FEW DOLLARS MORE, and stayed at the Plaza, a journalist from Time came to visit me. Every week, Time publishes a color insert, with articles and exceptional photos. And so, while the photographer readied his Nagra, he dropped this insert on the end table, and I began to leaf through it, almost mechanically, past the introductory pages until I reached at the very center some very interesting pictures snapped during a riot in New York. As in a cinematic sequence the photos showed in succession: the entrance of two blacks into a burned out store. Then, we see the two taking a case of beer. Next, the police waiting outside by the exit of the store. Then the youths leaving with their bottles. And the police unleashing a volley of gunfire upon the two in flight. Then The killing of one of the pair. And in the last shot, a policeman with his foot on top of an agonized black man, looking around with the same satisfied expression as a lion hunter in the jungle.
Well, I'd just barely finished surveying this chilling photo sequence, when the photographer turned his Nagra on me and fired away with his first question: " Mr. Leone, how come there's so much violence in your films?" My only response was to ask him if he hadn't yet leafed through the magazine he worked for. It's clear that certain films can be detrimental. RIFIFI might encourage burglary etc. But a certain type of violence belongs to life, it's life that informs art, and not the other way around. Otherwise, it would be sufficient to make only films like CINDERELLA and SNOW WHITE, and we'd have solved all our problems concerning sin and virtue.
Posted by William Connolly at 11:13 PM