Jacques Tourneur on THE GIANT OF MARATHON 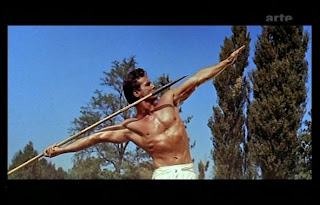 Jacques Tourneur: My agent was in Rome and ran into Mr. Muscle, you know, Steve Reeves. They spoke about cinema, Steve Reeves said he adored the legend of the archer of fire (Robin Hood) and wanted to do a film like that. My agent told him that I was a director and that he was my agent. At the time I was a writer for which I was paid lavishly, but I did it because, after all they wanted to work with me. It was one of those films (LA BATTAGLIA DI MARATONA - THE GIANT OF MARATHON) in which the actors speak different languages, and this makes the film unsupportably static. The girl speaks in French, Steve Reeves answers it in English, and that's the way it goes.
I began to shoot the dramatic scenes. I had a contract of eight weeks, and my remuneration was apportioned for those eight weeks. But I didn't know that they worked so slowly in Italy. At the end of the eight weeks, I would be paid pro-rata, at so much per day.
It happened that at the end of the eight weeks I had shot all the dramatic scenes, but there still remained the underwater scenes to do (However, for me, going underwater was impossible). And there was also the run, the famous run (which gave us the word "marathon" to describe a long-distance race), in effect all those scenes that were not dialogue scenes. The producers then re-examined my contract, and they discovered that they had no obligation to keep me on, and therefore no need to pay through the nose for me to do any further days of work. The run ended up being shot by (Bruno) Vailati, and all of the finale (the underwater shots) by Vailati and (Mario) Bava. Why should they be obliged to hang on to me for filming these disputed underwater or running sequences. Anybody could do it.
Posted by William Connolly at 7:29 AM