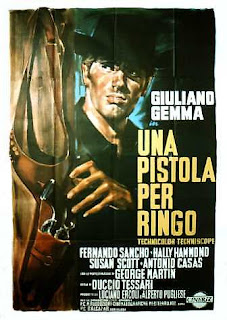 Duccio Tessari: Originally, I thought of doing an (ironic) anti-Western, with an actor who did things unconventionally. That is, a hero who shot his enemies in the back because it's much less dangerous than shooting face to face; who'd be inclined to sell himself to the highest bidder; who'd bring an ironic attitude to the character and to the situations he got involved with; committed to a constant jousting between himself and the other characters. I hadn't thought of an actual story yet, but I had some ideas in mind. Then I left for a trip to Spain, I saw a certain house, and I changed my idea completely, because it reminded me of DESPERATE HOURS with Humphrey Bogart. (None of us invents anything. Homer and Tolstoy invented everything, and everyone else just continues to recycle their ideas). So I redid DESPERATE HOURS as a Western, and having written it that way, I did a second draft in a completely ironic anti-Western vein.
Gemma had no difficulties with the acting in UNA PISTOLA PER RINGO (A PISTOL FOR RINGO). Gemma's a young guy who's completely attuned to irony. I must say that having chosen him as the actor ahead of time, writing the part with him in mind made my job much easier. On my first encounter with Gemma I was struck by a man who treated himself and his affairs with a full measure of irony, always taking any situation easily in stride. For IL RITORNO DI RINGO (THE RETURN OF RINGO) I was inspired instead by The Odyssey, blatantly retelling the tale of Ulysses' return home, with Penelope, the Suitors and all the rest. Homer was stupendous at writing stories, so why bother making the effort to think up one of my own? The Odyssey came spontaneously to mind as a source. It's not like I had to torture my intellect to come up with the notion. I truly love the classics, and any time that there's an excuse to retell one of them, I leap at the chance.
Posted by William Connolly at 10:23 PM