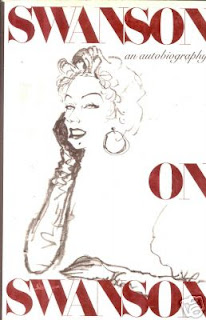 Watching SUNSET BOULEVARD with my wife inspired me to finally read Gloria Swanson's autobiography which someone gave me about a decade ago. It's a great read and particularly interesting as an "I was there" report on early Hollywood.
After making SUNSET BOULEVARD, Swanson appeared on Broadway with Jose Ferrer in a revival of TWENTIETH CENTURY - and he threw the party at which they listened to the radio broadcast of the Academy Awards during which Jose got Best Actor for CYRANO DE BERGERAC and Gloria lost Best Actress to Judy Holliday for BORN YESTERDAY.
Swanson then made THREE FOR BEDROOM C, which wasn't successful.
"My next picture, called NERO'S MISTRESS, had a stellar international cast, including Brigitte Bardot, Vittorio De Sica, and Alberto Sordi, but it was so bad that six years elapsed between the shooting in Italy in 1956 and the picture's release in a dubbed version in the United States in 1962."
Has anyone got a copy of NERO'S MISTRESS?
Posted by William Connolly at 10:04 PM