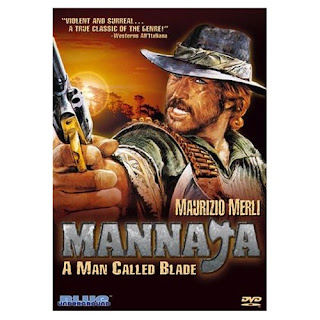 With the 1976 boxoffice success of KEOMA, Italian moviemakers discovered that Westerns could still attract enthusiastic audiences and producer Luciano Martino suggested that his writer/director brother Sergio take a break from the violent thrillers on which they had both built a solid career. While Sergio had made one previous Western – 1970’s ARIZONA SI SCATENO E IL FECE FUORI TUTTI/ARIZONA – it was his following film, 1971's LO STRANO VIZIO DELLA SIGNORA WARDH/THE NEXT VICTIM (which helped to make a star of the sexy Edwige Fenech) that brought him real success.

Rather than the ironic tone of the Sergio Leone/Clint Eastwood collaborations that inspired most of the Italian Westerns of the 1960s, Sergio Martino chose a grim atmosphere similar to KEOMA's. Additionally, the Martinos hired KEOMA music composers Guido and Maurizio De Angelis as well as Irish actor Donal O'Brien (who is frequently mis-credited as "Donald"). For his star, Sergio cast Franco Nero look-a-like Maurizio Merli. However, while Merli's resemblance to the bigger star probably helped lift him from his career on TV to the big screen – particularly when taking over from Nero as the lead in a ZANNA BIANCA/WHITE FANG sequel – Merli had established himself at the box office in a number of successful police thrillers including 1975's ROMA VIOLENTA, from which Sergio also chose his main villain, John Steiner. While Steiner had begun his acting career in England, where he trained at the Royal Academy of Dramatic Arts and was a member of the Royal Shakespeare Company for Peter Brooks' production of MARAT/SADE, his film career really began during a vacation in Italy. During this vacation, Steiner was shocked to discover how popular the film version of MARAT/SADE had been in Italy, and how eager Italian filmmakers were to work with him. His paring with Merli in director Marino Girolami's ROMA VIOLENTA ensured him steady film work for many years to follow.

While KEOMA obviously provided inspiration for MANNAJA, Sergio Martinodid not try to copy that film's attempt at a "Shakespearean family tragedy". Instead he came up with a straightforward narrative involving a bounty killer known for using a hatchet to disarm (Or is that dis-hand?) his opponents. While seeking a sheriff to turn in his latest captive, Blade becomes entangled in a plot to take over a silver mine owned by the man who caused his father's death. In the terrific featurette on this DVD, Sergio says that the film is filled with fog and rain to help hide the disrepair into which the Western town set had fallen. While this is no doubt true, it is also strikingly similar to the gothic atmosphere he created for his notorious 1973 giallo I CORPI PRESENTANO TRACCE DI VIOLENZA CARNALE/TORSO. Whatever the reason, this look helps to make MANNAJA a wonderful visual experience as well as one of the last great films of the Spaghetti Western genre. It is a shame that Sergio Martino did not make another Western after this; he had a real flare for it.
Posted by William Connolly at 1:56 PM