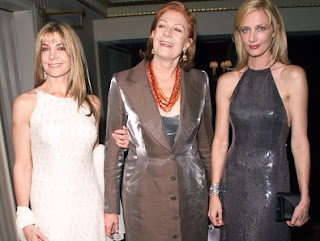 Natasha Richardson with her mother Vanessa Redgrave and her sister Joely Richardson.

I just watched BLOW DRY recently, so hearing that Natasha Richardson died seemed more tragic than the usual news story about the death of an actor I'd never met. In the film, Natasha played a woman dying of cancer who tried to bring together all of the people in her life that she loved by involving them in an hair-styling competition. It was not a great movie, but the cast was quite charming - particularly Natasha. The vulnerability she showed as she pulled off her wig to expose the hair loss from chemotherapy was moving. The filmmakers wanted you to fall in love with the character, and many viewers probably fell in love with the actress. Natasha Richardson had an impressive list of Film and TV credits that I can still enjoy finding and watching, but it is easy to imagine that her sudden departure from the lives of those close to her is something from which they may never really recover.
Posted by William Connolly at 11:37 PM