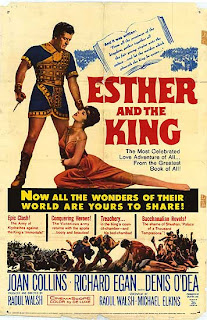 Mario Bava: I always filmed in a hurry. Twelve days at the maximum to do a film. With all the shots already in my head. Then I turned to the editing, which I also had clearly in my head, and I wasted nothing, not even a meter of film. I have made a movie with only 8000 meters of film at my disposal. The Americans, (Raoul) Walsh for example, "covered himself," as they say. The single pre-occupation was not to be inventive, but " to cover," that is to be sure to have got everything. They shot the same scene twenty times for fear of making a mistake. Once I said to Walsh, on the set of ESTHER AND THE KING, "Why don't you throw all the pages of the script that you've filmed into a brazier, that way you'll be sure you haven't forgotten anything?"
He took the hint and laughed.
Posted by William Connolly at 11:01 PM