The original story of THE MERCENARY 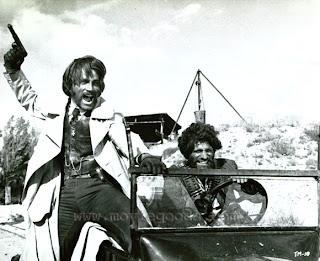 Giorgio Arlorio: The (original Solinas) story was more ambiguous than usually was the case with the "political" westerns of those years of the TEPEPA type. In a Texas jail, a man condemned to death is pardoned on the condition that he go to Mexico - in the throes of Revolution - and make sure that the brother of the man who pardoned him is safe and sound. In Mexico, he discovers that the man's already been killed, and he falls in with some peons, who admire his technical ability, and they hire him, submitting to a few conditions he demands: the right to rob, rape etc. whoever he wants. Under his military guidance, the group grows, it defeats the cavalry, it conquers a city. But once he's served his purpose, the peons condemn him to death after thanking him; chiefly because he has raped their women, shot who he pleased etc. The chief of the peons asks him if he has a last request: "Yes, I'd like you to shoot me!" It doesn't feel right to him, and he sets him free. Fifteen days later, all the band is captured by reactionary forces and condemned to death. The peon sees amongst the enemy the selfsame man, the mercenary. Last wish? "That you kill me." And the mercenary says" Se non e questo!", and he shoots him!! There was something Brechtian in this story and its logic. But in the film that was made with Tony Musante, and - I think - Franco Nero, all of this was lost. It ended up being directed not by Pontecorvo, but by Corbucci.
Posted by William Connolly at 10:46 PM