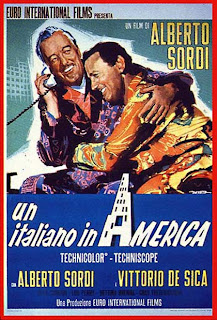 by Ernesto G. Laura
In 1966, Alberto Sordi, while not ceasing to be an actor, took up directing, a point of arrival that was imaginable from the very beginning of his career. FUMO DI LONDRA (double meaning: SMOKE OF LONDON or GRAY FLANNELS), his first film written with Sergio Amidei, is the delightful caricature of an incurably "Anglophile" Italian, an antique-dealer from Perugia who has a passion for a certain England that was disappearing: the bowler hat, the umbrella on the arm, the austere gray flannel clothes, the fox hunts, the great country homes, the city pubs, the Queen's guards. He goes to London on business and finds all that, but gradually realizes that there is a new emerging England, the England of the young who dress in casual-wear, adore the Beatles (we're in the '60s) and even take drugs. Without being particularly deep, FUMO DI LONDRA draws a witty picture, not only of the leading character but also of this changing England.
UN ITALIANO IN AMERICA (AN ITALIAN IN AMERICA), made in 1967, is richer in satirical observations and more acute. After the antique dealer with his passion for England, this time it is a gas station attendant with a passion for the United States. Thanks to a television show organized by one of the major networks, the obscure Giuseppe, an anonymous Roman gas-station attendent, is invited to New York, all expenses paid, to be reunited, under the eyes of millions of spectators, with his immigrant father whom he hasn't heard of in thirty years. The opening sequence, with the pungent description of a typical American television show, all keyed to the pathetic aspects of the situation, is perhaps the best thing in the film, though the lively, scathing tone is subsequently maintained in describing Giuseppe's progressive disillusionment with his father, who is a mediocre petered-out adventurer, and with a reality that is more complicated and difficult than he had dreamed of. The film, also starring an excellent Vittorio De Sica, was entirely shot in the United States.
Posted by William Connolly at 3:12 PM