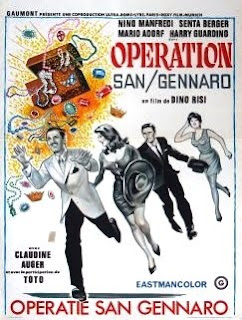 by Ernesto G. Laura
Manfredi steps out of the sphere of merely national prestige with the light-hearted OPERAZIONE SAN GENNARO (OPERATION SAN GENNARO: 1966) by Dino Risi, a sort of parody of the American "hard-boiled film" set in Naples amidst the Song Festival and the procession of San Gennaro, with a "guappo" (that is, a local gang leader) who joins up with three Americans (the leader of the three was played by Harry Guardino) to steal the fabulous treasure of San Gennaro preserved in the underground vaults of the Naples Cathedral. Everything goes wrong, despite the advice of the expert Don Vincenzo (Toto), who receives his clients in jail, and the unfortunate thieves end up carrying the statue of the saint in procession, after having unintentionally helped discover the treasure. Neapolitan folklore and parody of American action films intermingle in a comicalness of high quality. In 1966, it was awarded a silver medal at the Moscow Festival.
In the '60s, many Italian directors were anxious to weigh the pros and cons of their own generation which at an early age had known Fascism and experienced the war and the postwar period. In 1967, Nanni Loy made what was essentially an autobiographical film, IL PADRE DI FAMIGLIA (THE HEAD OF THE FAMILY), which narrated twenty years in the life of a couple - Nino Manfredi, an architect, Republican and Socialist, and Leslie Caron, a girl who believed in the monarchy - from when they met in 1946 during the institutional referendum which gave birth to the Republic up to the middle of the 1960s. It is the exemplary story of a family with children, the crisis of ideals, the fraying of their emotional relations, the temptation of non-commitment, ending with the wife, who has borne most of the weight of the family on her shoulders, being admitted to a clinic with a nervous breakdown. Void of great moments, the film moves in the intermediate range of a good story, with satirical episodes tempered by moments of pathos.
Posted by William Connolly at 4:02 PM