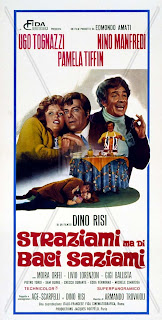 by Ernesto G. Laura
That Manfredi refused to limit herself to a set character does not mean, however, that he denied those Ciociaria peasant roots which go to make up an important part of his personality. His Marino Balestrini, a village barber, in STRAZIAMI, MA DI BACI SAZIAMI (TORTURE ME, BUT FILL ME WITH KISSES: 1968) by Dino Risi, extracts from precisely this social and geographical background its perfect description as a character. The story, written by Age and Scarpelli, more than once touches upon death creating out of it occasions for laughter: when the young engaged couple tries to commit suicide for love, when Marino, out of a job, jumps into the Tiber, lastly when he and his former girlfriend try to bump off her deaf-mute husband. A paradoxical plot leads to a complex story, now caricatural now pathetic, where the American actress, Pamela Tiffin, is the pretty village girl fought over by the barber, Nino Manfredi, and her husband, Ugo Tognazzi. RIUSCIRANNO, I NOSTRI EROI A RITROVARE IL LORO AMICO MISTERIOSAMENTE SCOMPARSO IN AFRICA? (WILL OUR HEROES SUCCEED IN FINDING THEIR FRIEND WHO HAS MYSTERIOUSLY DISAPPEARED IN AFRICA?) is the mile-long title of a bizarre film Ettore Scola made in 1968 on a script by Age, Scarpelli and the director. The remote inspiration of the film is Stanley's trip to find Livingstone, but bought up to date and adapted to modern times. It would be a Roman publisher, Alberto Sordi, accompanied by one of his employees, Bernard Blier, in the capacity of collaborator, driver and in other words, slave, to go to Africa to follow the traces, at first feeble then more and more substantial, of his brother-in-law, Nino Manfredi, who had disappeared months before. They would find him in a native village, acting as witch doctor to the tribe and not the least bit anxious to go home: in that particular status he makes his protest against industrial civilization. Age and Scarpelli were also the authors of ROSOLINO PATERNO, SOLDATO... (ROSOLINO PATERNO, SOLDIER...), directed in 1970 by Nanni Loy and meant as a vehicle to launch Manfredi on the American market. But after TUTTI A CASA (EVERYBODY HOME), it was difficult to say something new about the war in Italy in 1943, and the comedy with pretences of historical popularization did not turn out as incisive as it could have been. It tells of the vicissitudes of an Allied commando unit parachuted into Sicily at the beginning of 1943 to prepare for the Anglo-American landing. One member of it is an Italian prisoner-of-war, the soldier of the title, who is supposed to act as guide but who is interested only in escaping to go see his home-town girl-friend. Manfredi co-starred with three American actors: Peter Falk, Jason Robards, Jr. and Martin Landau (who later became popular on television in the Space 1999 series).
Posted by William Connolly at 11:47 AM