9. Ugo Tognazzi: From the Farce To the Comedy of Manners part one 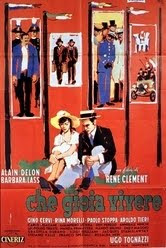 by Ernesto G. Laura
More and less the same age as Sordi (1920) and Manfredi (1921), Ugo Tognazzi, born in Lombardy in 1922, is the third popular name around which the Italian-style comedy developed over the last twenty years. Unlike the others, however, he didn't serve his apprenticeship in the movies: in 1950, when he appeared in his first film (I CADETTI DI GUASCOGNA - THE CADETS OF GASCONY - directed by Mario Mattoli) it was already in a starring role. And yet it took some ten years of successful but mediocre films for him to escape the routine of superficial farces and be given more substantial roles in comedies of manners.
Like Sordi, Tognazzi had worked hard for many years in variety shows, rising from the small-time vaudeville theaters on the outskirts of town to the big musical revues. In 1950, he was still not a popular star like Macario, for whom he was a stand-in, or Toto, even so his revues were among the most modern in their texts (written first by Gelich and then by Scarnicci adn Tarabusi) and in their "formula": he was the first to introduce, instead of the traditional humor, the "nonsense comedy" that became known in Italy especially after the success of Potter's HELLZAPOPPIN; he was the first to mix together big spectacular numbers with more intimate and restrained cabaret acts.
When Italian motion pictures found it convenient to make series of films for every successful variety show comedian, Tognazzi also got his space on the screen; it was at that time, however, that Toto reigned supreme in films of that kind. In 1954, the newly born Italian television gave him the possibility of enormously enlarging his circle of fans with a Saturday night show, UN DUE TRE (ONE TWO THREE), that for several years was at the top of the popularity polls. Working with Raimondo Vianello, his "stooge" but not exactly a partner in the theater, he formed an extraordinary comedy team. Next to Vianelli, tall and thin with washed-out hair, physically and psychologically immersed in a British kind of humor played absolutely deadpan, Tognazzi stood out both because of his extraverted dash and the cunningness of a certain crafty guile.
In the days of the great popularity of stage revues, Tognazzi was primarily an eminent representative of that genre of entertainment and secondly a familiar television face; the movies were a sideline, nothing particularly important, in which he alternated leading roles in second-rate films and brief appearances as "guest star" in some even important films. The latter was the case with CHE GIOIA VIVERE! (WHAT A JOY TO BE ALIVE!), directed in Italy in 1961 by French director Rene Clement and starring another Frenchman, Alain Delon, an affectionate and light-hearted portrayal of 1921 Rome through an endearing family of anarchists. Tognazzi for the first time called attention to himself in a secondary but amusingly sketched role: a Bulgarian terrorist who has come to Rome to carry out an assassination.
Posted by William Connolly at 12:25 PM