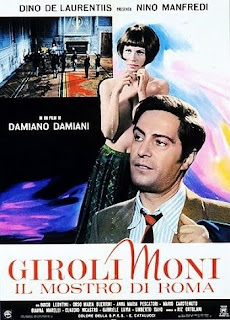 by Ernesto G. Laura
Among films based on the contemporary history of Italy, GIROLIMONI - IL MOSTRO DI ROMA (GIROLIMONI - THE MONSTER OF ROME) was much more vivid. Damiano Damiani evocatively depicts the Rome of 1925 at the time of the coup d'etat which brought Benito Mussolini to power. The Girolimoni "case" caused great excitement in the press and in public opinion. In involved an amateur photographer accused of being the "monster" who, latter-day Jack The Ripper, had terrorized the popular quarters of Borgo and Ponte, raping and murdering little girls. An ambitious policeman, giving credence to the declaration of a jealous husband, arrested the innocent Girolimoni, thus setting into motion an implacable judiciary machine. It was in the interests of the Mussolini regime to show the efficiency of the police and it exploited the "case" in order to re-introduce capital punishment in Italy. But the evidence against the accused was shaky and after almost a year in jail he had to be released.
The newspapers, which had headlined his name for months, were ordered, however, not to report his release and so the poor man returned to normal life destroyed, with the reputation of being a murderer. It is a thoroughly dramatic film which, strictly speaking, lies outside the present survey. But if Nino Manfredi is so convincing and effective in picturing the progressive destruction of Girolimoni's personality, first a self-confident man and great conqueror of women, then the shadow of himself, it is because he builds his role by also making use of those fleeting touches of irony and humor typical of comedy, and in this way everything becomes truer and more human.
If GIROLIMONI - IL MOSTRO DI ROMA (GIROLIMONI - THE MONSTER OF ROME) is a dramatic film with a character who also reflects the comedy tradition, PANE E CICCOLATA (BREAD AND CHOCOLATE: 1974), one of the most significant films in the recent Italian cinema, deals with a dramatic subject along the lines of the grotesque, references even to the classical German Expressionism of the '20s. Based on a story by Franco Brusati, the director of the film and a distinguished playwright, the script, written by Brusati, Jaia Fiastri and Nino Manfredi, seeks to depict the situation of the Italian immigrant in Switzerland, starting with a Southerner who has a good job as a waiter, but is fired and loses his residence permit. So half undercover he begins to do every sort of odd job and they all come to nothing, till one day he is ordered out of the country. Manfredi clearly has in mind Chaplin's tramp when, with infinite subtlety, he sketches the figure of this naive worker who fails to become "intergrated" and like many immigrants is caught between homesickness for the land he has left behind and the desire to become a permanent part of the host country. There is also the bitter portrayal of a misunderstanding, that which exists between certain citizens of a rich country and the poor immigrant who is wanting in elegant manners and dresses badly and is thus viewed with contempt. To sustain so deeply committed a film in a grotesque key without falling into the farce was very difficult, but Brusati's creative gifts merge perfectly with Manfredi's creative and dramatic gifts, assuring successful results. The film won the Silver Bear at the Berling Festival.
Posted by William Connolly at 8:16 AM