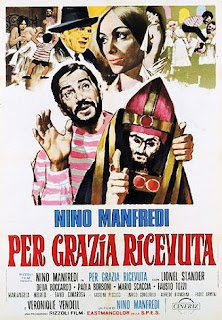 by Ernesto G. Laura
Nino Manfredi, an obviously gifted creative actor, has almost always collaborated on the scripts of his films, has often supplied the story, but has appeared as director only twice. His first attempt, L'AVVENTURA DEL SOLDATO (THE SOLDIER'S ADVENTURE), an episode in L'AMORE DIFFICILE (DIFFICULT AMOURS), has already been mentioned with regard to the episode film genre. The second was a full-length film, PER GRAZIA RICEVUTA (FOR MERCY RECEIVED). After having been a top box-office success in Italy in 1971, it also received unanimous critical acclaim and won the prize for the best "first film" at the Cannes Festival. Despite that, Manfredi, curiously enough, has never directed another film.
PER GRAZIA RICEVUTA (FOR MERCY RECEIVED) indicates, among other things, what a vast range can be covered by Italian-style comedy. After having confronted the simple satire of manners and the great political and civil satire, with this film the genre touches upon the fundamental theme of religion, of religious training, of the relationship between man and God. In PER GRAZIA RICEVUTA (FOR MERCY RECEIVED), there is a basic autobiographical strain, but reinvented in the imagination so that the plot bears no specific relation to Manfredi's real life. The leading character, Benedetto, while about to undergo an operation, weighs the pros and cons of his life and in a flash-back re-experiences his childhood in a small Ciociaro village, when he lived with an aunt in a very strict household from the religious and moral point of view and where the slightest mention of sex was considered sinful. Later, Benedetto makes the acquaintance of a pharmacist who declares he is atheist and a "free thinker", falls in love with his daughter, Giovanna, but doesn't marry her in church in order not to conform to a ceremony he no longer believes in. He would be very disappointed, however, when the pharmacist on his death bed suddenly calls the priest and confesses, receiving the sacrament of the "Extreme Unction". The film is neither fideistic nor anti-religious or anti-clerical in intent: it represented a serious approach to the problem of a certain form of traditional education and forcefully stressed the importance of the religious problem in man even in modern society. Manfredi brought into high relief the environment of the country and the small town that surrounds and conditions the characters, making use of humor for an effective analysis of that world. Particularly worth of note the excellent performance of the American actor Lionel Stander in the exquisitely Italian role of the pharmacist.
Posted by William Connolly at 9:41 AM