8. Nino Manfredi Outside the Set Character part one 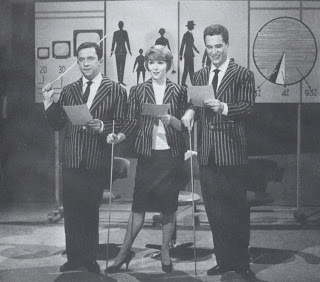 In 1959, Nino Manfredi appeared on the TV show Canzonissima.

From: COMEDY ITALIAN STYLE
by Ernesto G. Laura
Among the actors to whom the film comedy owes its success, Nino Manfredi represents an opposite case from Sordi. While Sordi, as we have seen, though at home in every kind of role, met with success only when he got his "personage" into focus, Manfredi, starting off with a "personage" that suited him, did everything to shake it off and to impose himself as an actor who knew how to "invent himself" upon each occasion.
Born near Rome in the province of Frosinone in 1921 (a year after Sordi), with a degree in law and an acting diploma from the National Academy of Dramatic Art, Manfredi started his artistic career in the theater, winning acclaim at an early age in a wholly "serious" repetoire: Buchner, Arthur Miller, Cocteau, Saroyan, Shakespeare, Sophocles, Pirandello, Moliere, Anouilh, Clifford Odets, Ibsen... And yet, a distinguished theater critic, Enzo Ferriesi, seeing him in 1947 in Cocteau's THE TWO-HEADED EAGLE, already realized that "that...you man, Manfredi" was "perfectly prepared for those difficult shifts from the pathetic to the humorous, from the solemn to the wild, which American films may well have gotten us used to, but which in the theater... are anything but common." Starting as a dramatic actor (but he was also an excellent Harlequin in a Goldoni comedy), Manfredi was therefore predisposed to comedy.
He would subsequently venture into the musical revue, work for the radio and ultimately on television: in a very popular evening show, Canzonissima (1959), he would make a big hit, drawing upon his peasant origins to create the highly amusing figure of a Ciociaro shepherd (the Ciociaria is a hilly region near Rome). This would have been his set character: in a film world linked to the city and to industrial society, a hillbilly type could have unquestionably been a success and stood out from the others. But it was precisely this that Manfredi didn't want. So he preferred not making films rather than accept the easy way of repeating ad nauseam the "shepherd from Ceccano."
So Nino Manfredi's personal contribution - he too was an actor who was at the same time an author - to the Italian film comedy would be that he broke the "cliche" of the set character, and resorted to psychological observation to give life to different human types. His sound professional preparation and his theatrical apprenticeship enabled him, also on a stylistic level, to apply different approaches, in a constant exploration of style.
Posted by William Connolly at 2:58 PM