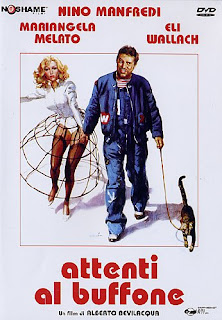 by Ernesto G. Laura
Chaplinesque echoes are also to be found in Marcello, a meek, dreamy violinist who lives with a wife, a prostitute by profession but deeply in love with him, and a cat, the role played by Manfredi in ATTENTI AL BUFFONE! (LOOK OUT FOR THE JESTER!: 1975) by director and writer Alberto Bevilacqua, written by Bevilacqua and Manfredi. It's a wholly allegorical story about a former Fascist party official bound up in the myth of the vanished Empire (an excellent Eli Wallach) who invades Marcello's house and empties it, first carrying off his wife and then insisting that the violinist come along too as a sort of "court jester".
John Steinbeck's powerful novel, TOBACCO ROAD, has been suggested as the model for BRUTTI, SPORCHI E CATTIVI (UGLY, DIRTY AND NASTY) by Ettore Scola, one of the most important achievements of both the director and the leading actor, Nino Manfredi. It is an atypical comedy that lies outside any formerly attempted model, though some remote reference to neo-realism might be traceable. The action is set in a ramshackle shanty not far from St. Peter's Square in Rome where a "big, happy family" of Southern immigrants lives all piled together, sons, wives, grandchildren, and all revolving around the foul, old, dirty, arrogant and violent Grandpa Giacinto. A farce teeming with vigorous popular spirits, it brings to the scene an almost sub-human state of existence, people united only by instinct and spasmodically craving the money they know Giacinto has hidden somewhere. Manfredi completely re-invents himself, making himself older, brutish and ugly, in a memorable creation, surrounded moreover by non-professional actors, chosen from the real inhabitants of the Roman shanty-towns. Scola won the prize for the best directing at the Cannes Festival.
A negative character, but not without arguments in his favor, Barletta, a public accountant, is the protagonist of IL GIOCATTOLO (THE TOY), directed in 1979 by Giuliano Montaldo and written by Sergio Donati, Manfredi and Montaldo on a story by Donati (a popular detective story writer and skilled in creating situations of suspense). The film shows how a man who is not only normal but positively meek and shy, with nothing but a hobby of clocks, can gradually turn into an extraordinarily violent gunman. In order to compensate for the frustrations of his dreary life as an office clerk, Barletta starts going to a rifle range and practices shooting, imitating the cowboy heroes of the Far West he idolizes. Then when a policeman who is a friend of his is shot down before his very eyes he reacts, almost without realizing it, by killing the assassin. So he becomes famous, the local hero in all the headlines, but he also becomes a different person. He is seized by a kind of passion for killing, the pistol "toy" becomes an instrument of death. Manfredi is extraordinary, though Montaldo's direction seems uncertain as to what level to work on, and alternates grotesqueness and realism with some lapes in taste.
Posted by William Connolly at 1:25 PM