The director on FACE TO FACE. 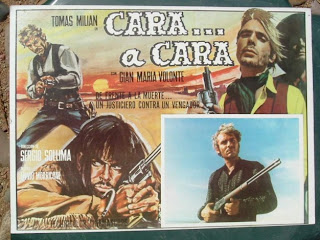 Sergio Sollima: Maybe the film of mine I loved the most was FACCIA A FACCIA (FACE TO FACE), the second Western I did. Perhaps, in part because it was my idea, my story. Volonte and Milian were in it, and there was William Berger too. I'd found Berger for the film at the Centro sperimentale per la TV [a state run media lab], and he worked out splendidly. With FACE TO FACE I have a certain technical rimpianto that impedes me a little. It's that the film, an epic story, ought to have had more time to play out, three hours worth. The story obligated more stately rhythms, as well as additional episodes, to fully breathe and live. And the film was cut because I shot too much for the two hours I was asked for. It's the story of a professor ailing from TB, who goes to Texas to recuperate. He encounters a bandit, one of the "wild bunch" (it may have been the first film where the Wild Bunch entered into play) who then takes him hostage. Then -slowly, slowly- a strange osmosis occurs between the two. The professor begins to recuperate, and his aggressive instincts start to flourish along with his physical vitality. The bandit begins to be sensitized by the professor to culture for the first time, reflecting on problems that the other poses to him: for example about why he shoots, why he kills...And there's an exchange between the characters...the one becomes something of a bandit; the other a little less of one.
Once again, characters conditioned by the context, confronted with certain circumstances they discover themselves to be different than how they'd been before. To be perfectly clear, at the beginning of it all is the story of my little girlfriend who denounced me to the Germans because her father was a fascist. She was a peaceful bourgeois who would have led a perfectly normal life if these things, if History, had not intervened...And in that same period, I saw a young kid of eighteen who "non gli avresti dato un soldo di stima" and who was tortured at Via Tasso so he'd give up all of our names, and he didn't do it and he ended up in the Ardeatine Cave (scene of the most infamous anti-Resistance reprisal). These are things that shape you very deeply.
Posted by William Connolly at 12:08 AM