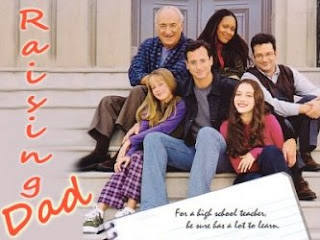 About a month after 9/11/01, an half-hour sitcom premiered on the WB that I quite enjoyed - dispite not being a fan of many sitcoms. Quite possibly my enjoyment was helped by the fact that I was assisting in the raising of a teenage girl at the time, and there was alot of good stuff aimed at teenage girls then - the first BRING IT ON, the JOSIE AND THE PUSSYCATS movie and THE VIRGIN SUICIDES just being the ones that quickly spring to mind. But I liked Raising Dad more than Melissa did, and Rosalynd just didn't get it. I could not get through an episode of Full House, but I liked Bob Saget on America's Funniest Home Videos when I accidently came across it; so he wasn't the real draw. Jerry Adler and Andy Kindler were amusing, and I still enjoy seeing them: Jerry on Rescue Me and Andy on his visits on the Late Show with David Letterman. But the real stars of the show were the daughters, Kat Dennings and Brie Larson. Kat recently got alot of publicity co-starring in NICK & NORA'S INFINITE PLAYLIST after attracting alot of attention in THE 40-YEAR OLD VIRGIN. But what inspired this posting is that I've just seen the first episode of The United States of Tara on Showtime. There's Brie as the teenage daughter of Toni Collette and skillfully holding her own. See Toots! I can spot talent! Sorry, Meagan Good - I didn't remember you. But now that I know who you were on the TV version of Minority Report I am a new fan.
Posted by William Connolly at 10:36 AM