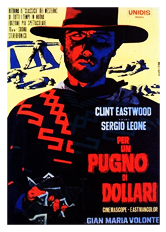 From: National Catholic Office For Motion Pictures Films '69/70
Film Education The Western: A Genre in Transition prepared by Frank Frost USC
The disillusionment we see in THE WILD BUNCH is not exactly new, nor is the public unprepared for its degree of violence. The unabashed violence of the Sergio Leone Westerns (A FISTFUL OF DOLLARS, and so on) was no hindrance to their very popular success. To a public saturated with the saccharine goodness of men who shoot only when they have to, and then only to wound, in the defense of delicate women (whether they be devoted wives or pretty prostitutes), Leone's films offered a cynical and textured real world in which men are ugly, unshaven, sweaty, and irritated by horse flies. Likewise women are plain, earthy, and as hard, calculating, and self-seeking as anyone else. Peckinpah also creates such a texture, tempered, however, with characters who have some human feelings
Posted by William Connolly at 8:44 AM