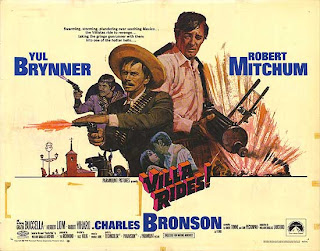 From: YUL BRYNNER
THE INSCRUTABLE KING
by Jhan Robbins
In his next screen venture, VILLA RIDES (1968), Yul was cast as Pancho Villa, the famous Mexican revolutionary. Soon after the film was released, Arthur Godfrey read a rhyming review on his NBC television program:
VILLA RIDES is filled with so much rot,
Authentic Mexican history it is not.
So what else has this wacky movie got?
Yul. And these days he's not so hot.
Brynner was in a Paris hotel when he was told about Godfrey's uncomplimentary appraisal. He stayed up all night composing a rebuttal. As soon as it was finished he sent it to NBC and demanded equal time.
"I'd served a hitch in the Navy, and I thought nothing could embarrass me," Godfrey said. "But I have to admit that I blushed when I read Yul's reply. Practically every other word was obscene."
Brynner defended VILLA RIDES. "It was a wonderful screenplay," he said. "The director whom I had personally approved had to bow out because he was needed on another film. He was replaced with a director who had very little movie experience. When it came out, everything looked flattened and the performances were meaningless. Added to that sorry mess, the film had been cut in the wrong way. It was a bloody shame, because it's so rare to get a good script. Damn few picture makers really know anything about the film industry. To get a cushy movie job you have to be an accountant, a lawyer, or a stockbroker. It's very uncommon to have risen from the ranks!"
Brynner preferred making movies outside the United States. "Foreign countries still regard the actor as somebody," he said. "In Hollywood, the actor has become just another businessman - seldom a true artist."
Posted by William Connolly at 11:37 PM