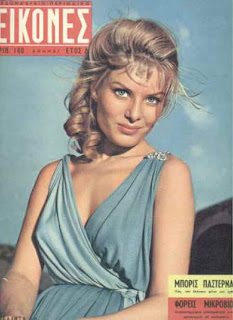 From: Hollywood Citizen News
March 14, 1961
Belinda Lee, Actress, Dies In Auto Wreck
BAKER, Calif. (UPI) - Beautiful British actress Belinda Lee, whose love affair with Italian Prince Filippo Orsini led to her attempted suicide in 1958, was killed late yesterday in a spectacular 100-mile-an-hour auto crash.
Miss Lee, 25, hailed as England's answer to such film queens as Brigitte Bardot and Sophia Loren, was thrown 63 feet when the auto she was in blew a back tire, skidded 900 feet and flipped over on its top.
Three other persons in the auto, including her latest love, dashing Italian screen writer Gualtiero Jacopetti, 39, suffered serious injuries in the crash 12 miles east of this desert community.
The two others were Alet Nino Falenza, of Malibu, driver of the auto, and Paol Cavara, 34, Los Angeles. The injured were taken to Barstow Community Hospital.
The foursome had been at Las Vegas, working on a new movie and were returning to Hollywood when the accident occurred on U.S. 91, nearly 210 miles east of Los Angeles.
"She died shortly after the first officer arrived," said highway patrolman Donald Armitage, one of the first investigators on the scene.
"It's a wonder they weren't all killed. Blowouts at that speed are almost always fatal. A witness - a highway employe - told us the car went past him shortly before the blowout and must have been traveling about 100 miles an hour."
Member of a well-to-do Devonshire, England, family, blonde, green-eyed Miss Lee broke off her highly publicized affair with Orsini last year and announced her engagement to Jacopetti.
Jacopetti said they were to have been married as soon as he could obtain an annulment from his 18-year-old Gypsy wife of five years in Italy.
Miss Lee's husband, photographer Cornel Lucas, seperated from her in 1957, and in 1959 he named Orsini corespondent when he obtained a divorce. They had wed in 1954.
[Jacopetti dedicated his film, WOMEN OF THE WORLD, to Belinda Lee.]
Posted by William Connolly at 8:54 AM