A vintage review of THE CONFORMIST 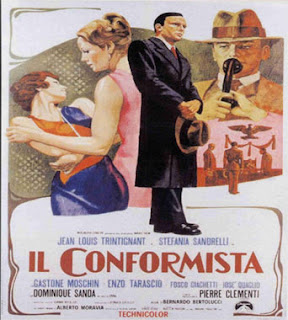 I'm going through some old issues of FILMS IN REVIEW from 1970 and 1971, edited by Henry Hart, and they are a real hoot. Hart and his team of reviewers are quite a reactionary group, lambasting those two years as being the worst in cinema history citing the hero of THE FRENCH CONNECTION as "a sadist tyrannizing over blacks and... a sex pervert", THE LAST PICTURE SHOW as "one of those specious denigrations of American life" and DEATH IN VENICE showing "the Left's utilization of sexual perversion for political subversion". Also entertaining is their creation of new words: instead of cinematic adaptation they use "cinemation", instead of theatrical films they use "theafilms".
Considering it's current reputation as a modern classic, THE CONFORMIST gets a rather different review in those old pages.
From: FILMS IN REVIEW
April 1971, Vol. XXII No. 4
THE CONFORMIST
Alberto Moravia's novels about the Italian aristocracy are a little better than the denigrations of the British aristocracy once concocted for servant girls, but not much. His THE CONFORMIST, on which this film is based, is supposed to be one of his best. Its protagonist, the son of an insane father and a mother who is a drug-addicted nymphomaniac, becomes, in a zombie sort of way, a member of the Fascist Party. Jean Louis Trintignant portrays him and is a fitting choice for such a part.
All this is so facititious and uninteresting director Bernardo Bertolucci endeavors to save his cinemation of it from banality by obfuscating everything. Deliberately. At least I hope it was deliberately.
The result is a worthless film even the Left is none too enthusiastic about.
ELIOT ALTHOUSE
Posted by William Connolly at 10:11 PM