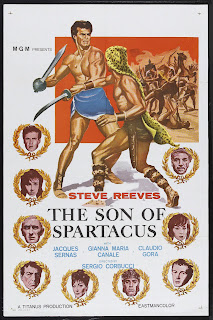 From: Cine Zine Zone #50
Interview by Carlo Piazza, May 1989
Translated into French by Pierre Charles and then translated into English by Arcides Gonzales
CP: The film, THE SON OF SPARTACUS, with the character of Randus-Zorro, is another in the Western style.
Sergio Corbucci: I would say so. Yes, absolutely. As far as I am concerned, if I have to refer to someone, I refer to John Ford and not to Cecil B. DeMille. In Italy, at any rate, we have had directors who did sword and sandal films formally more correct than from a DeMillean point of view, but that goes back to the silent film. ROMULUS AND REMUS and THE SON OF SPARTACUS are two current, modern films, which seem to have been shot yesterday and not about 30 years ago.
CP: What can you tell us about Steve Reeves?
SC: A great guy. He always did everything I told him without a fuss. There are actors who seem to know it all. That makes me go mad. Not Reeves. I cannot complain about him.
During the shooting of ROMULUS AND REMUS, he showed me some resentment nonetheless because he thought I favored Scott over him. Of course, that wasn't true. I have never favored any actor over another. I have always treated everybody equally. Reeves had gotten this idea because he would often see me laughing and joking in the company of Scott. But Scott is the extrovert type; happy, who would cheer you up, and I preferred, frankly, to be with him than with Reeves, who was always taciturn and sullen.
CP: Do you think Leone thought about Reeves for the leading role in FISTFUL OF DOLLARS?
SC: I don't think so. Reeves does not know how to walk - perhaps because of his big thighs which impeded his movement. He wasn't right for a Western, and Leone knew it.
Posted by William Connolly at 10:19 PM