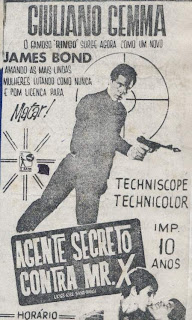 LDL: Who influenced you the most?
Duccio Tessari: I think that, even if we don't realize it, we are influenced all the time. One who reads - a learned man or anyone, possesses a little critical sense. It's difficult to not be influenced because these people keep on stocking-up a great deal of things.
We are never original - not when we write, neither when we speak and make a pun. However, when you read a lot, or see and assimilate a lot of films, its gets difficult to distinguish between what is your own and what is not. As a film director, my great loves have been Ford, Hawks, Hathaway - but they did not influence me in the way of shooting. Or, at least, not that I am aware. The two directors I really feel bound to are De Sica and Luchino Visconti.
Posted by William Connolly at 2:00 PM